An easy-to-use device for infant circumcision has proved to be safe in an international randomized controlled clinical trial led by Weill Cornell Medicine physician-scientists. The results suggest that the device could boost efforts to increase circumcision rates and prevent HIV in low-resource settings where early infant circumcision is not widespread.

“Voluntary male medical circumcision decreases the risk of HIV transmission by half to two-thirds. It also reduces the risk of transmitting other sexually transmitted diseases,” said senior author Dr. Richard Lee, associate professor of urology and Nanette Laitman Clinical Scholar in Population Health Sciences/Community Health at Weill Cornell Medicine and a urologist at NewYork-Presbyterian/Weill Cornell Medical Center. “Early infant circumcision is simpler and has several other benefits over circumcising adolescent or adult men, such as faster wound healing, no need to take time off of work, and fewer risks and complications.”

Study co-investigator and corresponding author of this report,  Dr. Philip Li, professor of research in urology and reproductive medicine at Weill Cornell Medicine, discovered the ShangRing device, invented by Jian-Zhong Shang, during a trip to China over a decade ago. It uses two concentric plastic rings to sandwich the foreskin allowing a practitioner to cut away the excess skin with minimal bleeding and without stitches. The procedure can be performed under local anesthesia and takes less than 5 minutes.

“We were looking for a device that would accelerate task-shifting from physicians to non-physicians and reduce the need for extensive surgical training,” Dr. Li explained. “Countries with limited numbers of urologists and surgeons rely heavily on nurses and medical officers to perform voluntary medical male circumcisions (VMMC) in Africa.” 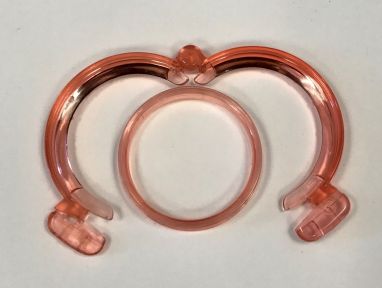 It was immediately apparent that the ShangRing was a “game-changer,” said study co-author Dr. Marc Goldstein, the Matthew P. Hardy, Ph.D. Distinguished Professor of Reproductive Medicine and Urology at Weill Cornell Medicine and director of the Center for Male Reproductive Medicine and Microsurgery at NewYork-Presbyterian/Weill Cornell Medical Center. He said that in addition to having minimal training requirements, the disposable ShangRing device comes pre-sterilized, reducing the time, costs and resources needed for sterilizing reusable circumcision devices, such as the Mogen clamp.

With seed funding from Weill Cornell Medicine and grants from the Bill & Melinda Gates Foundation and the National Institutes of Health, the Weill Cornell Medicine investigators launched a series of clinical trials of the ShangRing device in sub-Saharan Africa, starting in men, then adolescents, and now infants.

In the latest study, 1420 healthy infants in Kenya, Tanzania and Uganda were randomized to be circumcised with either the ShangRing or the Mogen clamp. Nurses or medical officers, who underwent a training protocol with both devices before the study, performed nearly all the procedures. All the infants received a rectal suppository of acetaminophen, a topical anesthetic, and a sugary liquid to alleviate pain. Infants in both groups had similarly low rates of adverse events and post-surgical pain. Ninety-seven percent of the infants’ parents or legal representatives reported they were happy with the procedure and its results.

The next steps for the team will be working to expand the implementation of using the ShangRing for VMMC in Africa. The ShangRing is currently the only World Health Organization pre-qualified male circumcision device used in VMMC in Africa for males aged ten and up. Dr. Li said about 2 million adult and adolescent males had safely undergone the ShangRing procedure worldwide.

“This is a major advance in our fight against sexually transmitted diseases,” Dr. Goldstein said.